My son pulled a book from the bookstore shelf the other day that he thought might be good for my writing students: The Writers Journey: Mythic Structure for Writers

It is written for screenwriters (which I’m not – at least not so far), so I’d never noticed it before. But I was immediately drawn to the hedge labyrinth on the cover for its symmetry and symbolism, recalling my days at the Cathedral Church of Saint John the Divine and my early search for my writer’s voice. It all began with the exploration of myth.

I hadn’t thought of it in a while. I had long ago learned how to create a story without a distinct, preordained template, but as I paged through the book, I saw that it turned on the theme of some of my earliest writings: The Hero’s Journey.

I’m probably showing my age here, but I remember distinctly when the freedom and daring to write a long, plotted novel came to me. It was while watching Bill Moyers’ fantastic conversations with Joseph Campbell, “The Power of Myth”, on PBS.

In that series of insightful interviews, Campbell embellished on the classic structure of the heroic “monomyth“: the hero’s call to adventure that takes him out of the ordinary world; his descent into darkness, enduring terrible trials and ordeals; and his eventual return, usually older or almost certainly wiser.

It was such a strong and obvious journey – one I knew I could follow. And I did. My first novel was based on it; and in some ways perhaps all that has followed has fit some version of that mold.

It brought to mind a saying that there are only three basic plots, but infinite variations. I looked it up online and found infinite variations on the saying itself, and exponential granularity in the distinct central themes of those supposedly limited plots.

It made me think of a fractal, which is a geometrical structure that expresses itself with ever increasing complexity, creating endless and fascinating variations. They are everywhere in nature: in microscopic strands of DNA, in the unfurling of a fern, in the staggering structure of a giant redwood tree, in the jagged contours of the Himalayas. 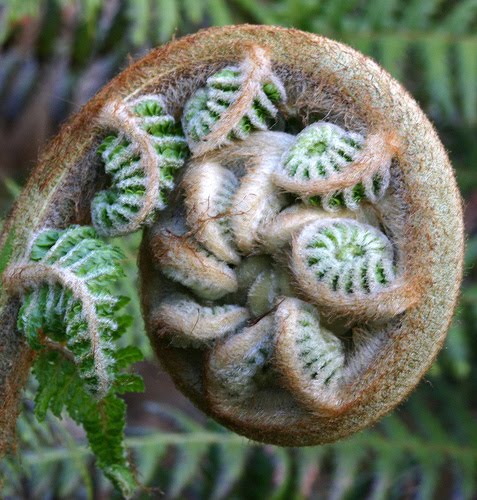 Can it be that our play with words is part of that same unfolding magnificence? Are we simply following the natural path set out for us, but taking our own route? Each step and story leads us farther on our own writer’s journey, which can be heroic indeed.

. Though I haven’t read it yet, it’s been added to my towering, ever more precarious pile.